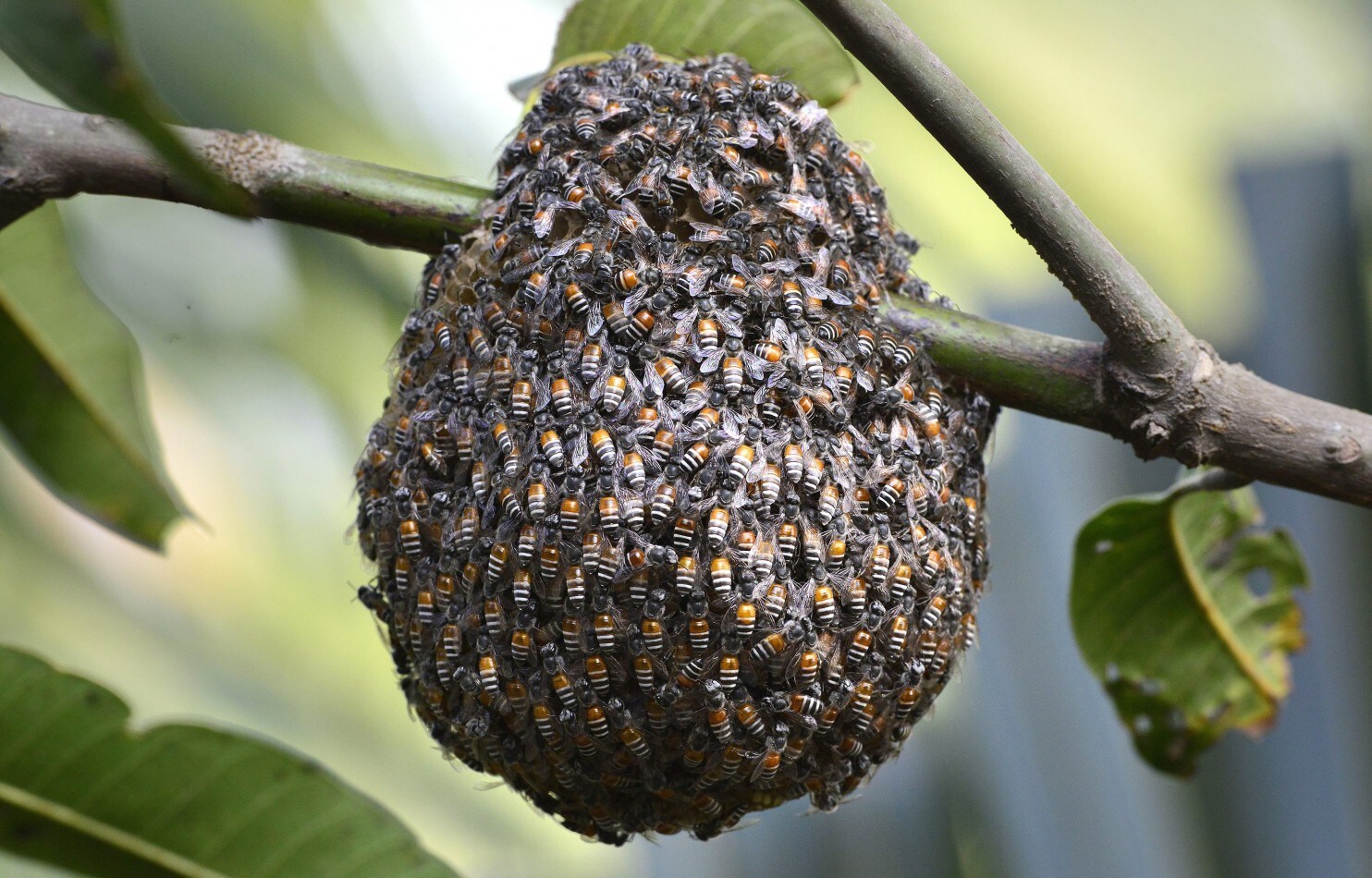 –  HOW DO HONEYBEES FLY

Good day friends, its nice meeting you again. I am sure you’ve been having fun learning a lot about the bee. And once again I am Bee Royal. Today I’ll like to tell about swarming in honey bees. But first let’s do a quick revision of our last lesson.

Reviewing our last lesson we were able to list and give a brief description of the bee’s behavior. Now, we will be discussing on “swarming in honey bees”. This is basically the beginning of a new colony. Each honey bee colony of mostly a queen bee, thousands of worker bee and hundreds of drones and also consists of developing eggs, larvae, and pupae. There comes a time when the hive will be too small to contain the large number, thus the need to swarm.

Like humans, we bees need space in which to live. We need a place to raise brood, to store honey and pollen and carry out our various daily activities. In the spring and summer, a colony can grow quite dramatically, both in numbers and in the space needed.  When space starts becoming too limited, bees need a solution. And the best solution is swarming.

Swarming in honey bees is the natural means of reproduction of honey bee colonies. A new honey bee colony is formed when the queen bee leaves the colony with a large group of worker bees, this is referred to as reproduction at the colony level. Swarming is seen as one of the processes in the life cycle of a bee. Swarming is the normal way a hive handles overpopulation. The old queen takes about half the hive, leaving behind queen cells or cups so the hive can raise and prepare a new queen and continue to thrive. She starts another colony elsewhere. One hive becomes two.

Just like every other living thing, there’s preparation before swarming takes place in a hive. Queen cups/cells are created by workers daily. The queen will not ordinarily lay eggs in them. The bees communicate through ‘pheromones’, the queen honey bee produces the ‘queen pheromone’. This pheromone attracts the workers to her, and encourages them to build the comb, forage, and tend the brood. The whole colony knows it must have a queen for its continued survival. There is only one queen in each colony, As the colony grows and increases in number, some workers lose contact with her and it gets to the point that some don’t even know she exists. Then she sees the need for her colony to swarm.  She then starts laying eggs in the queen cup/cells– she plans to leave and she is also preparing a queen that will take over in the existing hive. This action sends a signal to other members of the colony and they begin to prepare. Since the queen is heavy due to the fact that she’s is the only one laying eggs and is always heavily fed She isn’t in a position to fly therefore, she needs to lighten up. This is achieved by reducing her feedings and she then stops laying eggs. During a swarm three things happen;

Back at the original hive, the first queen to emerge from her queen cup, will hunt down her as-yet-unborn sister queens and kill them while they remain in their queen cups. She will be helped by some worker bees who will help clear the wax capping, so she has access to the killing. Once she has completed that process, she now becomes the queen of the initial hive.

Secondary after swarms may happen but are rare. After swarms are usually smaller and are accompanied by one or more virgin queens. This is when a new virgin queen and workers also swarm, again with a significant number of bees from the colony, though smaller than the original swarm. Sometimes a beehive will swarm in succession until it is almost totally depleted of workers. In the process of swarming the original single colony reproduces to two and sometimes more colonies.

A swarm of bees sometimes frightens people, though the bees are usually not aggressive at this stage of their life cycle. This is principally due to the swarming bees’ lack of brood (developing bees) to defend and their interest in finding a new nesting location for their queen. This does not mean that bees from a swarm will not attack if they perceive a threat; however, most bees only attack in response to intrusions against their hive. Swarm clusters, hanging off of a tree branch, will move on and find a suitable nesting location in a day or two.