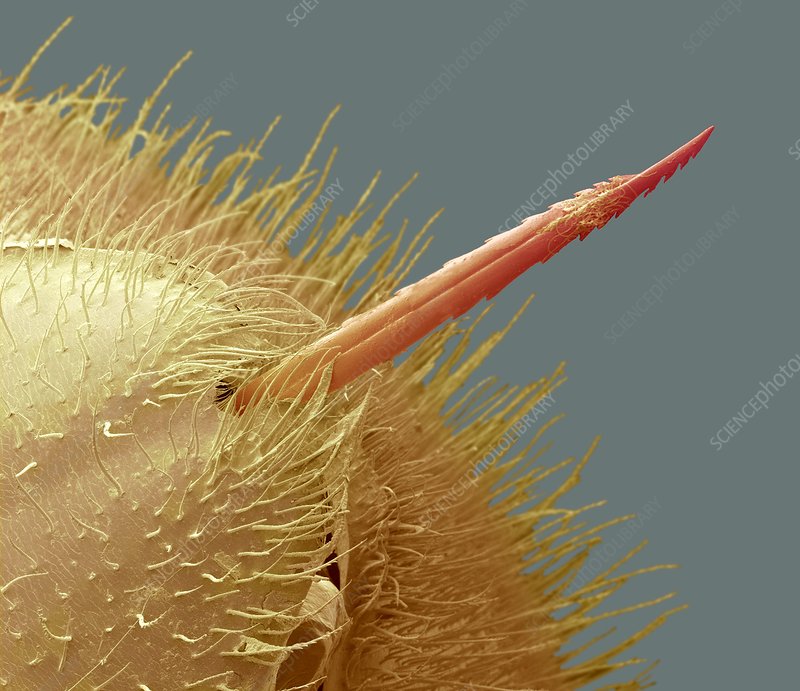 In our last lesson, we were able to discover that drones are not just flying semen, the fact is drones perform precisely the role nature gives them and they supply more than just the sperm for fertilization. In some ways, the colony’s survival depends on them. Today, we will be learning why bees sting. Bees are tiny insects that need to protect themselves from attack. Therefore, there is a need for a certain level of self-defense; honey bee stings. Let find out more.

There is an Aesop fable, “Jupiter and the Bee,” where the ancient Greek storyteller explains the origin of bee stings:

A bee from Mount Hymettus, the queen of the hive, ascended to Olympus to present Jupiter some honey fresh from her combs. Jupiter, delighted with the offering of honey, promised to give whatever she should ask. She, therefore, besought him, saying, “Give me, I pray thee, a sting, that if any mortal shall approach to take my honey, I may kill him.”  Jupiter was much displeased, for he loved the race of man, but could not refuse the request because of his promise.  He thus answered the Bee: “You shall have your request, but it will be at the peril of your own life. For if you use your sting, it shall remain in the wound you make, and then you will die from the loss of it.”

A bee sting is a sting from a bee (honey bee, bumblebee, sweat bee, etc.). The stings of most of these species can be quite painful and are therefore keenly avoided by many people.

Bee stings differ from insect bites, and the venom or toxin of stinging insects is quite different. Therefore, the body’s reaction to a bee sting may differ significantly from one species to another. Additionally, honey bee stings release pheromones that prompt other nearby bees to attack.

Why do honeybees sting?

A honey bee that is away from the hive foraging for nectar or pollen will rarely sting, except when stepped on or roughly handled. Honey bees actively seek out and sting when they perceive the hive to be threatened, often being alerted to this by the release of attack pheromones. Honeybees sting when they feel threatened, so respect them by keeping your distance, and never disturbing a hive or colony. They sting ;

A bee sting is an effort to drive you away. It is a rather effective technique. This is especially true if you get too close to a hive and a few thousand of their sisters come out to help.

Why do honeybees die when they sting?

Although it is widely believed that a worker honeybee can sting only once, this is a partial misconception; this only happens if the skin of the victim is sufficiently thick, such as a mammal’s (humans).

The honeybee stinger is hollow and pointed, like a hypodermic needle. The stinger consists of three parts: a stylus and two saw-toothed blades (barbed slide or lancets), one on either side of the stylus. The bee does not push the stinger in but it is drawn in by the lancets. The slides move alternately up and down the stylus so when the barb of one slide has caught and retracts, it pulls the stylus and the other barbed slide into the wound. When the other barb has caught, it also retracts up the stylus pulling the sting further in. This process is repeated until the sting is fully in and even continues after the sting and its mechanism is detached from the bee’s abdomen. The stinger is tied to the digestive tract of the bee as is the venom sac that produces the venom. It looks — and works — like a screw anchor, meaning that once in, the stinger can’t retract.

When a honeybee stings, it dies a gruesome death. The bee’s stinger is structured in such a way that once it punctures human skin, the bee can’t yank it out without self-amputating. As the honeybee tries to pull out the stinger, it ruptures its lower abdomen, leaving the stinger embedded, pulling out instead a string of digestive material, muscles, glands, and a venom sac. What results is a gaping hole at the end of the abdomen, this massive abdominal rupture kills the honey bee.

Also, when a honey bee stings, it releases an alarm pheromone to alert the other workers in the colony. It is said that the pheromones smell like banana. These pheromones excite the other bees in the hive, who will open their mandibles, protrude their stingers, and sting anything that moves close to them. The result is other bees are recruited to the area to defend the colony as well. The scent of the venom released from the honeybee signals a threat to the hive. The process of leaving behind a body part as a form of defense – in this case, part of the abdomen – is called autotomy.

It is only the female honeybees, also known as the worker bees, that sting. Worker bees are like disposable soldiers for the colony: their sole function is to gather nectar, pollinate, and defend the base. They are all infertile females except for the drones and queen. Although an individual bee dies when it stings, this makes sense from an evolutionary perspective. Since workers do not reproduce on their own, they are giving up their own lives so the queen and any new reproductive can survive to lay eggs in the future that is the only way they can ensure their genes are passed on.

Do all honey bees sting?

Most honey bees do sting.  In a normal honey bee colony, there are 3 types of bees – the queen bee, the worker bees, and the only male bees– (drones). All of the female bees (queen and workers) are able to sting, but the male honey bees, or drones aren’t. Why? Because they do not need stingers, they collect no food and do not protect the hive from attack. Their only job is to mate with new virgin queens.

The stinger is a modified ovipositor or egg-laying tool. This is why it is found only in the female honeybees. Worker bees are responsible for most bee stings, they are tasked with the job of defending the hive. If the hive is attacked by another honey bee colony (robbery), the worker bees will fly out by their hundreds or thousands to sting their rivals. When there is any attempt to raid the hive of honey (from the bee’s point of view), it is the female worker bees who are on the defensive line. In fact, they are easily agitated. Worker bees seem to be born knowing what to do, and sting instinctively. All that matters is to get rid of whatever is attacking the colony, and stinging works.

The Queen stings too

The queen honey bee sting is different from that of a worker bee. The stinger of a queen is longer and not barbed. So, a queen bee could sting but they rarely do and they can actually sting multiple times without dying. They are not likely to sting the average person since they rarely leave the hive and usually just sting rival queens coming to wrest the throne (“Game of Thrones”- This is honey bee politics). This is normal queen bee behavior.

Strangely, the workers will sting and kill a queen bee too. This happens when the colony decides to raise a new queen then the old one has to go! Also, beekeepers can cause the problem by introducing a new queen into a colony too quickly when trying to replace a failing queen. The new queen has to be introduced slowly so that If an old queen is present, she is killed. The new queen should be installed inside a protected cage, this allows the colony time to accept the pheromones of the new queen. Simply dumping a loose queen in a hive results in her being stung to death.

Symptoms of a honey bee sting

Honey bee stings hurts badly, but the symptoms that result from a sting differs, depending on the amount of poison that has entered the immune system of the victim. The initial pain eventually fades, only after a period of swelling and itching. Some victims may also experience visible signs, such as redness of the skin around the sting. Although the honey bee sting is not commonly hazardous, some people may be allergic to the bee’s venom and will experience severe side effects such as nausea, fainting and, in extreme cases, death. The numbers of stings also play a role in the effects. The more the stings, the more the severity of the reaction and it can be lethal to anyone if stung too many times. If a person is stung or has medical concerns related to honey bees, they should seek a medical professional.