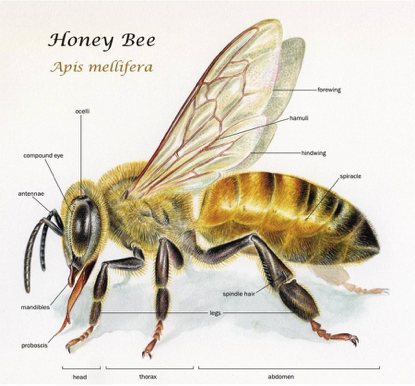 Good day friends, its nice meeting you again. I am sure you’ve been learning a lot about the bee. And once again I am Bee Royal. Let’s do a quick revision of our last lesson. In today’s post, we’ll be talking about the physical characteristics of Honey Bees.

For a while now we’ve been talking about the bee, we’ve seen who/what they are, their types and have moved focus to the honey bee and also realized that there are different types/species of the honey bee itself. Henceforth our focus will be on the honey bee. Today we are going to look into the characteristics or rather the body features of the honey bee.

Honey bees are insects and there are certain physical characteristics that all insects share. Most notably, insects have three body regions and six legs. The body regions are called the head, thorax, and abdomen. Each body region has an important role to play in the overall function of the honey bee. Correspondingly, the external structure of each body region is developed to support the given region’s function.

Here are the characteristics of Honey Bees:

The rear body region of a honey bee composed of nine segments and contains many organs including those for digestion, reproduction, and respiration.

The middle section of the honey bees three sections that contain the flight muscles, the wings, and six legs.

Did you know this about Honey Bees?